Robert E. Howard published most of his Conan stories in the fantasy and horror pulp magazine Weird Tales. Howard wrote for Weird Tales from 1924 to his death in 1936, and was mentored in his writing by the editor of the pulp magazine, Farnsworth Wright. While writing for Weird Tales, though before his Conan stories, Howard wrote a letter to the editor praising a reprint of another author’s recent story, “The Rats in the Walls.” The author of that short story was H.P. Lovecraft. When Wright forwarded the letter to Lovecraft it was the beginning of a lifelong correspondence between the two. Howard and Lovecraft exchanged letters discussing the context and subtext of the Conan stories, and Howard incorporated themes from what is now known as Lovecraft’s Cthulhu Mythos.

Howard is credited as having probably the most influence over the type of tale we now call “sword and sorcery”, but the conception of Conan the Barbarian we have today thanks to several Conan films is much different than what Howard created. Going into The Coming of Conan the Cimmerian, I expected what we see in the movies and comics, a character covered in blood, clad in a loincloth, sword cleaving through his enemies while a pair of nude women kneel beside him. But what I was presented with by Howard was different. He’s resourceful, intelligent, and very practical warrior. Conan isn’t anyone’s dummy, and despite the “low INT” reputation barbarians tend to have he is cunning and wily, as often using brains as brawn to best his enemies. The stories of Howard’s Conan show us a long career as he grows from thief and pirate to the king of the greatest nation of the Hyborean Age. Certainly Conan is a creature of brutish strength and is always ready to solve a problem with muscle, but he’s also intelligent, generally well-spoken (especially later in his life), and even chivalrous. 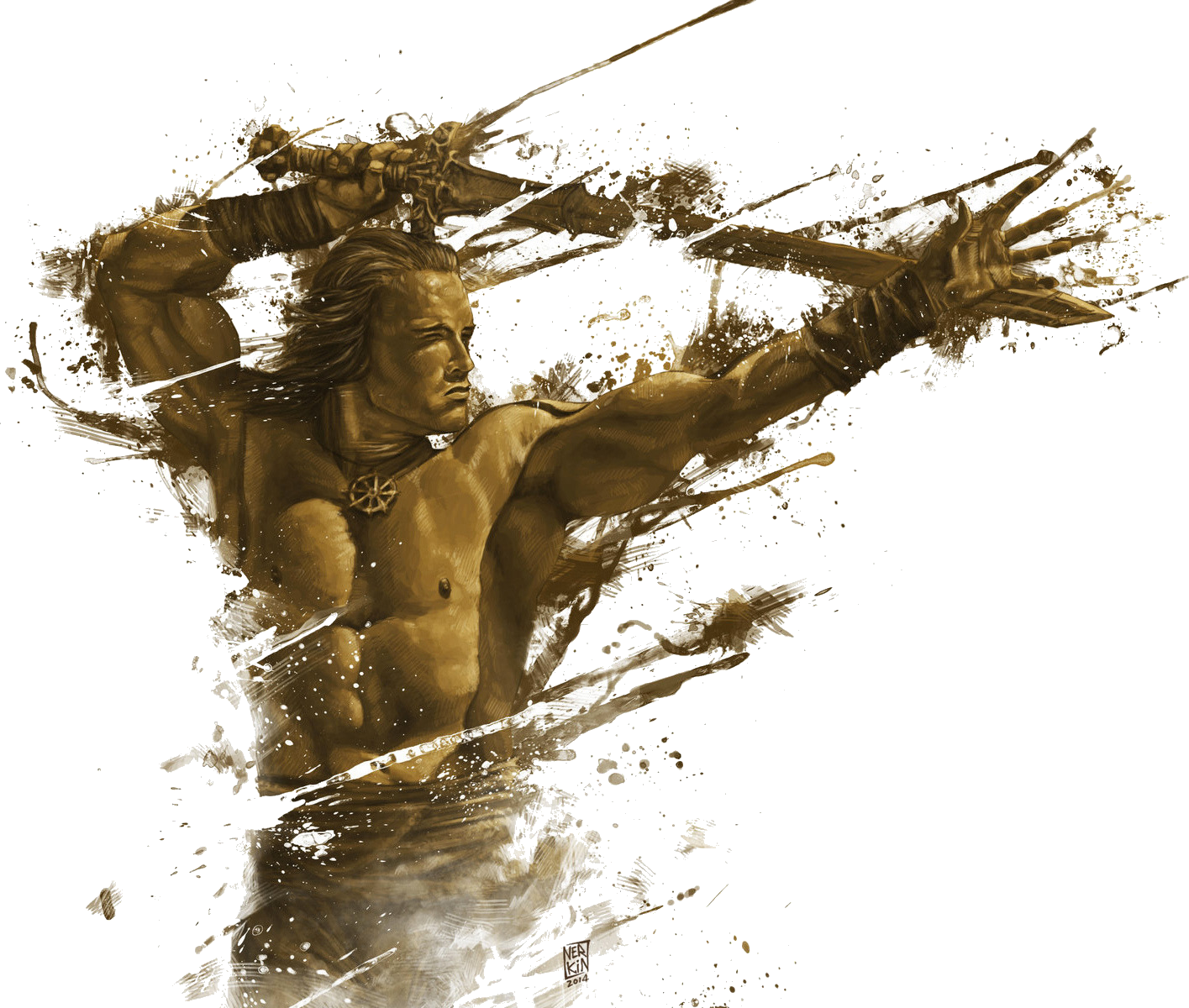 The Coming of Conan the Barbarian is an anthology of Conan tales unedited from Howard’s published short stories and presented in the publication order. It also omits stories by other authors, which in the past made it difficult to know which stories where original and which homages. That sort of thing really appeals to me, even if it does mean that the Conan I am reading about may not be the same one Gary Gygax was inspired by decades ago. They begin with shorter stories but the last few tales are longer and in my opinion are of higher quality. There’s a lot of inspiration here that a DM could use for one shots or to build out a campaign. The characters as well are colorful and unique, with their own motivations and relationships outside of the titular character. Players and DMs alike could glean ideas for creating their own interesting characters.

Howard’s ability to describe a vibrant scene is remarkable and many DMs could benefit from studying this. Note the frequent use of compound hypermodification in “polished helmets and curved swords and gold-chased corselets”, where each noun is modified by least one verb. Howard was a master of oral storytelling and we can all aspire to his mastery of description.

The world of Conan’s stories is an entirely fictionalized representation of a pre-flood Earth. Its nations and cultures are intentionally obvious allusions to real-world ones—Celts, Germanic tribes, you name it. Howard was a history buff, and wanted to create a playground in which to let his imagination run wild, but not one in which he would be constrained by all of real history. He created a low-fantasy historical fiction world in which to tell Conan’s stories. The Hyperborean Age is full of of violence and bloody axes, to be sure, but there’s still plenty of royal scheming, war, and intrigue.

This is first in a three volume series collecting all of Howard’s stories as well as his essays and poems relating to the character and the Hyperborean Age. Coming also includes beautiful illustrations for stories and important scenes by Mark Schultz. Each volume has a different artist. Unfortunately I found this out too late, and chose to listen to this book on Audible rather than purchase an ebook or physical book. Having seen some of the art, I fully intend to purchase all three physical volumes to appreciate the art and add to my bookshelf. 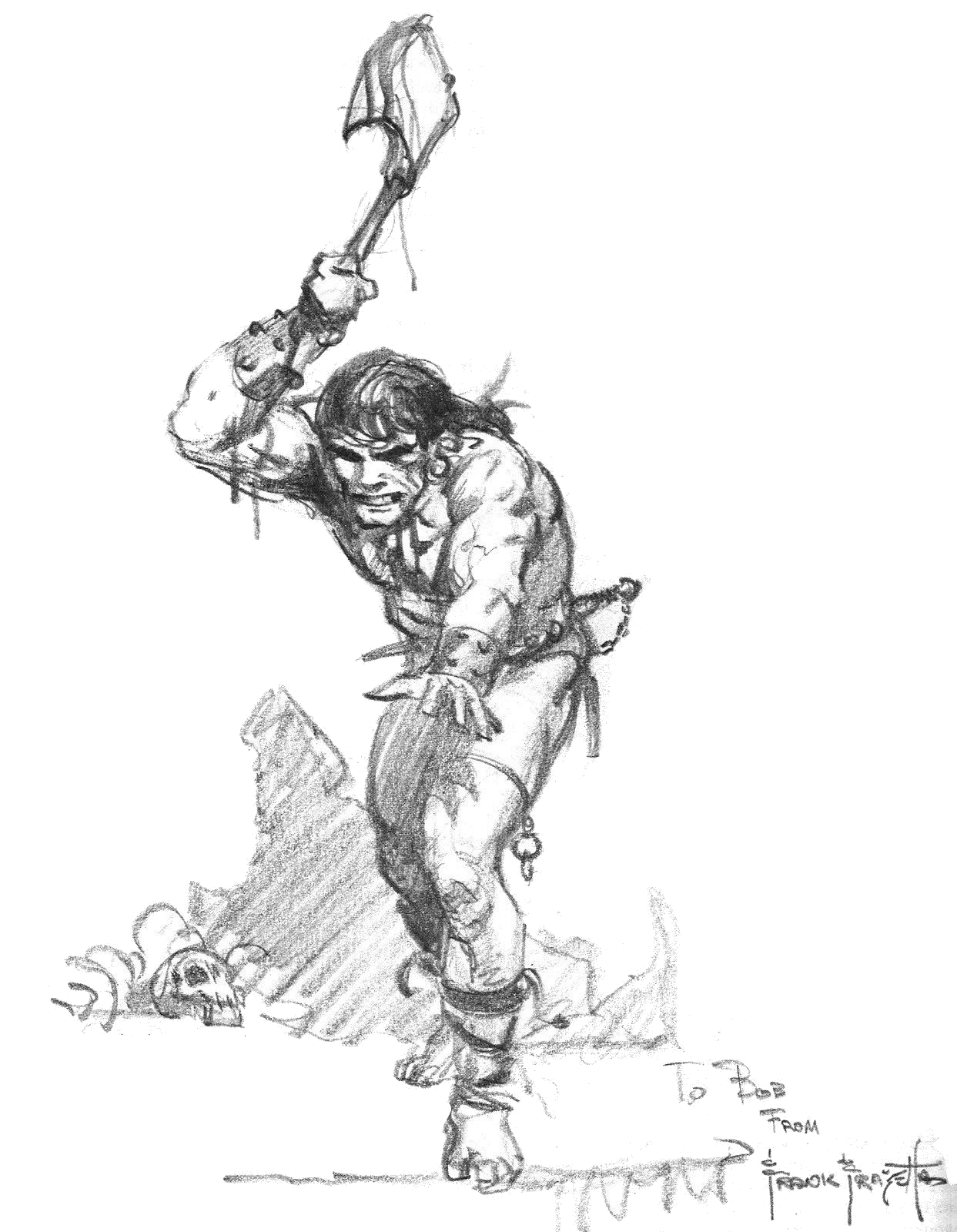 A common plot element in Conan’s tales is that of the damsel in distress. Conan never fails to come to her rescue, even at the cost of ruining his well-prepared plots to steal a MacGuffin. And yet, never does Conan ask for favors in return from his companions. When a romance does evolve naturally, Howard eschews explicitly describing any acts, instead hinting at them obliquely. Conan even defers to Belit’s plans in “Queen of the Black Coast”. “Hers was the mind that directed their raids, his the arm that carried out her ideas. It was a good life.”

Though often described doing unseemly things such as piracy, robbery, and plunder, Conan never actually partakes in these in the stories. In fact, Conan is more often the hero of the stories, even if his motivation tends toward his own survival or personal gain. He is lawful in his own way, being true to the ethics of his homeland as foil to the “civilized” antagonists’ often evil actions. The Conan we are presented with is likely a Lawful Good or Neutral Good person, though the Conan we are told about but who never appears in tales might tend more toward Chaos.

Conan’s enemies and allies were diverse and colorful: men and women from a multitude of cultures and ethnic groups. I think that as DMs we’re often inclined to use characters who look and act like us (most of the older D&D adventures I’ve read have mostly human NPCs and mostly monstrous opponents). Stories and adventures with the default western pseudo-medievalism are to me a tired trope. Howard’s tales helped to inspire me to use a greater variety of characters and backgrounds. Why can’t the bartender in Hommlet be a Goliath exiled for wanting to own a tavern instead of an old white human guy? Conan’s opponents are Middle Eastern, Mediterranean, African, Celtic, German, and Native American inspired characters. They can provide ideas for multicultural variety in our own campaign worlds, and to appreciate the variety of people of our own planet.

While the episodic nature of short story collections doesn’t always appeal to me, I did enjoy the growth of the character and of Howard’s storytelling ability throughout. I think this is a nice side-effect of finally collecting Howard’s stories in order. Conan is one of the primary influences of the barbarian archetype in early versions of D&D, and while that archetype has changed over the years it’s still great to see its roots.

I give Conan 4 of 5 stars. The escapist fiction and colorful, high-adventure stories share a grim undercurrent leaving reader with mixed emotions as they finish reading. Perhaps more tellingly, I plan to read the two remaining volumes in Del Rey’s Conan collection, The Bloody Crown of Conan and The Conquering Sword of Conan.